The German major offers students an interdisciplinary approach to German intellectual and cultural history by combining courses in German language and literature with courses in History, Philosophy, Music, and other appropriate fields.

For students who start German at Williams, the major requires a minimum of ten courses: German 101-102, 103, 104, 201 and 202; two 300-level German courses; and two electives from either German courses numbered above 202 or appropriate offerings in other departments.

For students who have acquired intermediate or greater proficiency in the language before coming to Williams, the minimum requirement is nine courses: German 202; two 300-level German courses; and six other courses selected from German courses numbered above 102 and appropriate offerings in other departments.

Examples of appropriate courses in other departments are:

Students may receive major credit for as many as four courses taken during study abroad in Germany or Austria in the junior year.

To enhance a student’s educational and professional profiles, the department offers the Certificate in German. It requires seven courses –three fewer than the major– and is especially appropriate for students who begin study of the language at Williams.

Required Courses are German 101, German 102, German 103, German 104 , and German 201. Note that students who enter Williams with previous training in German may substitute more advanced courses for the 100-level courses; they can also be exempted from up to two of the required courses. The student must achieve proficiency at the level of a B in German 104 or the equivalent. Two electives, at least one course on German cultural history (literature, art, drama, music) and another course on German intellectual, political, or social history (in German or English) rounds out the requirements for the certificate. Appropriate elective courses can usually be found among the offerings of German, Art History, History, Music, Philosophy, Political Science, and Theatre. 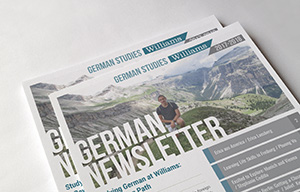 Check out the various careers our alumni have pursued after Williams!
→ END_OF_DOCUMENT_TOKEN_TO_BE_REPLACED